We love success stories – especially if there is a connection to food and travel along the way – so Elizabeth’s book, Travels in Blood and Honey, appealed to London Writers’ Club. We were delighted that Elizabeth wrote the following blog and really look forward to reading her book. 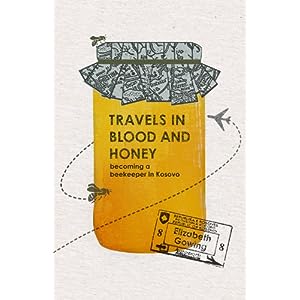 September is National Honey Month, an auspicious time if, like me, you are a beekeeper.  Apparently it’s also an auspicious time to write about your experiences – in my case Travels in Blood and Honey; becoming a beekeeper in Kosovo. It was exactly this time last year that I had my first LWC experience, and the same day that I was offered a contract for Travels in Blood and Honey to be published by Signal Books. The contract didn’t come at the ‘date with a publisher’ which the Club organised but the morning of the same day; I arrived in Clerkenwell that evening buzzing (sorry) with the meeting I’d just had with Signal, and wondering what on earth happens next.  I couldn’t have been in a better place to find out – as well as advice on pitching yourself to a publisher, the evening was packed full of ideas on how to promote your finished product, and I never thought the same way about publishing again.

What I learned? A book is a product.  It may also be your baby, a work of great literature, a score settled, a ghost laid.  But it’s a product.  And as an author you are also a product.  I took furious notes – of what the speakers said, but also of the suggestions made by my fellow authors.  I knew that Signal were a small publishing house and I would have to do much of the marketing legwork for the book myself, so I pulled together a plan.  In fact, now that I’ve talked to authors published by much bigger, more commercial houses, I’ve discovered that it can still be the case there that it’s the author who makes the marketing happen.  No doubt it’s largely down to individual publicists, but in one case, for example, a friend who has had three great reviews for her book in the national press got one through her own contacts, one through her agent and just one through her (well-known commercial) publisher.

I started to think about my ‘product’ – in this case a travel book but a quirky one (The Lady called it ‘a bold, unique stride across genres… Gowing blends them as skillfully as the ingredients in the mouth-watering, honey-based recipes that punctuate her text‘) mixing 1) travel, 2) food and 3) beekeeping.  While the quirkiness could be a challenge (bookshops not knowing where to put it – in one case it ended up under ‘animal husbandry’), it offered three times as many potential audiences.  I thought about how to attract people interested in travel (I created a Google map of places featured in the book, each accompanied by a short excerpt from the book, and it’s now been featured in Wanderlust magazine, who ran a competition using copies of the book as prizes) and particularly Kosovan travel (contact with diaspora media so I’ve been featured in various UK Albanian newspapers and sites as well as Albanian and Kosovan TV, radio and newspapers).  I had a different strategy for people interested in beekeeping (it’s been reviewed in the beekeeping press – yes, there is one – but I’ve also been invited to talk to beekeeping groups), and in food (I’ve baked honey pastries to accompany events in Kosovo, Cornwall and London and ran an evening with my friend and Culinary Anthropologist sharing recipes and foodie experiences from the book. With what I learned from LWC about Twitter I also set about ‘following’ beekeepers and honey-producers and featuring a blog, ‘100 Days of Honey’ to coincide with publication of the book.

I used Facebook, my email list and my alumni networks (article in school and university magazines, talk to students at my old school) and local media for any event I did (so as well as reviews in national papers and magazines I’ve been interviewed on BBC Radio Oxford and the book’s been reviewed in the Western Morning News, Cornish Guardian, village newsletter, Oxford Times and – for no clear reason – the Burnley Express.)

Success? Well so far so good.  Signal ordered a new print run a few months after publication. I’ve had lovely reviews (The Times:

‘a sheer delight; a beguiling, bittersweet story of a lively love affair with a traditional world, as ancient as apiculture, in transition to new nationhood’  http://www.thetimes.co.uk/tto/arts/books/non-fiction/article3060779.ece), an interview on Radio 4’s Excess Baggage (impossible without my publicist), five TV appearances in Kosovo, among other highlights for my vanity.  I’ve really enjoyed it – you wouldn’t do all this if you didn’t.  There are still things I want to try – I loved the idea of creating a soundscape to accompany readings, which was suggested at the LWC event, and I haven’t managed to have a single event staged at a honey-producing venue, which was one of the great suggestions made by one of my fellow writers last September.  I am, however, appearing at the Root Camp teenagers’ cookery school in Devon at half term, am looking forward to the Kindle launch (I will be baking more bloody baklava) and I’m planning a Christmas offer involving wooden honey drizzlers carved in Kosovo.  September may be the month for promoting honey, but I’m discovering that for promoting Travels in Blood and Honey there’s a year-round calendar.

Elizabeth Gowing’s Travels in Blood and Honey; becoming a beekeeper in Kosovo was published this summer with Signal Books.  Available on Amazon, in bookshops, and at a baklava event near you.