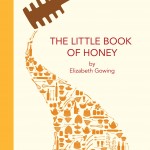 When my first book, Travels in Blood and Honey; becoming a beekeeper in Kosovo was published in 2011 by Signal Books I thought it was the most exciting thing that could ever happen to me. But now my second book has come out, (and just like my mother always tactfully says to me and my sister when she’s talking about having babies) there’s possibly even more of a thrill.

Because this book, The Little Book of Honey, has come out under my own imprint, Elbow Publishing.

I mean, how hard can it be to publish a book? After the experience with Travels in Blood and Honey; becoming a beekeeper in Kosovo, I decided I would find out for myself. Signal had told me from the beginning that they were a small press, with limited resource available to do the marketing for their books. Their publicist arranged some amazing experiences (appearing on Radio 4’s Excess Baggage with the thinking woman’s crush, John McCarthy for one) but I also put in many hours, emails, blogs and tweets to promote the book. I pulled in favours from old friends, made new friends, and offered to bake traditional Kosovan baklava for any group or bookshop who would have me for a talk or book signing session.

It was the talks that decided it in the end. I did a total of 25 events – with women’s groups, schools, universities, beekeepers groups, foodies, bookshops, a literary festival, a museum, a lifeboat station and a jazz club. I really enjoyed them (you wouldn’t do it unless that was the case) but it was standing on Great Malvern station, with a November wind whipping my coat around an empty rucksack (I’d run out of copies of the book to sell) and having missed my train, that I swore that the next time I took myself off on an author’s talk adventure I’d make more money from it. I wanted to take home something more than the paltry profit you can make on selling books that you’ve had to buy at only half-price from the publisher under the terms of your contract.

With plans already gestating for The Little Book of Honey, I decided I would start Elbow Publishing. Actually, that’s not true – at first I was going to start ‘Tell It To The Bees’, a funky name for a publisher, evoking rural traditions… though also a long name you might want to abbreviate. ‘Do you actually want to be referred to as TITT Bees? They sound uncomfortable’ my helpful friend, Dede, commented. So then I decided I would start Elbow Publishing. ‘Elbow’ is apparently the most beautiful word your mouth can say, with its particular movement of lips and tongue. And at the other extreme (and while you all sit there mouthing ‘elllboooow’ to yourselves) I liked its ‘Rosie the Riveter’ connotations of hard work and muscling in. Anyone who’s as interested as Dede in acronyms might also see another reason ‘Elbow’ appealed.

Maybe you already know, but I discovered that if you want to set yourself up as a publisher the minimum number of ISBNs you can buy is 10. That was actually a motivator for me – I wouldn’t just publish The Little Book of Honey then – what about that romantic novel I finished 15 years ago and have never shown anyone? Or the next travel book I’m planning? Suddenly this was a world of possibilities.

I knew I’d need help with this venture. Not just from my partner Rob (moral support and cash flow), and from helpful friends on Facebook, like Dede, but from the people who had been the most fun part of producing Travels in Blood and Honey – the designers I’d worked with: Su Jones and Paddy McEntaggart. Many small publishing houses seem to skimp on quality design so that you can spot a cheaply-produced book by something indefinable in the cover image (you can’t quite put your finger on it, but you know it’s not top quality. I have the same problem with low-fat crisps). Su and Paddy had produced a gorgeous cover for Travels in Blood and Honey so for The Little Book of Honey I asked them whether they’d work with me on illustrating the book throughout. I even persuaded them to bring to life the little dream I’d had for the first book, of having a flickbook effect bee flying round the page numbers. My publisher had told me that was too complicated and Paddy later said that the publisher had probably been right – but he and Su still managed to do it (you can see a cute video at www.thelittlebookofhoney.co.uk). What they produced was an artefact full of woodcut-style illustrations and that is beautiful to hold in your hands – a feast for the eyes as well as the stomach.

The content has been enthusiastically (sometimes droolingly) received. The book contains recipes for breads, cakes, puddings, drinks and dressings, all drenched, drizzled or delicately flavoured with nature’s most versatile sweetener. There are tasting notes too (for honey from thistle, viper’s bugloss and coriander, amongst many others), and the stories behind honey fighting poverty and its effects in Hackney, Kosovo and Nigeria. It was bought enthusiastically at Christmas as a gift for the bee-friendly gardener, the gourmet, the sweet of tooth, those looking for inspiration in eating local, and anyone wanting to make life an extended honeymoon. It was helped on its way by the fact that my first book had received a Gourmand award, and Sophie Grigson had given it an enthusiastic review (‘Enthralling…. Food, above all honey, is the key that unlocks the doors between cultures’.)

And would I do it again?

Yes. I’ve learned some lessons about pricing (and not committing yourself to printing prices on the book cover), about distribution agreements, about the difference between a Facebook ‘like’ and a sale. But I’ve also, with Su and Paddy, produced a product I am completely proud of, with no compromise, and where I know that I am benefiting directly from every penny of its success. And I’ve had a lot of fun.

So, with nine ISBNs still unaccounted for, Elbow Publishing is looking forward to its next title coming out later this year.

Elizabeth Gowing is the author of Travels in Blood and Honey; becoming a beekeeper in Kosovo (Signal Books, 2011) and The Little Book of Honey (Elbow Publishing, 2012) – www.thelittlebookofhoney.co.uk.