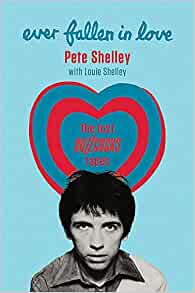 I’ve been a member of LWC since 2013. In June 2021 my first book was published: ‘Ever Fallen In Love’, a rock biography written with Pete Shelley of punk pioneers, Buzzcocks (I’m no relation to Pete).

The ‘meat’ of the book is written direct from interview with Pete in the song-by-song format. It’s supplemented by my introduction and conclusion, describing how Buzzcocks fit into the punk milieu and what their legacy has been. We were blessed to have Malcolm Garrett MBE – one of the best graphic designers in the world – conceive and supervise the ‘look’ of the book and fortunate to be able to source many photos which have not been seen before.

Pete sadly died in December 2018 and so, when I started approaching agents in 2019, the project then had especial kudos and saleability. Kevin Pocklington of The North Literary Agency was perhaps the fifth agent I contacted, after having been signposted to him by another agency. I felt fortunate to have ‘got lucky’ so quickly.

My experience, then, was not typical – it was Pete Shelley and the Buzzcocks ‘brand’ that sold my project to Kevin, as much as my writing – but my writing was good enough and, rather than having to tout the concept round to dozens of publishers, Kevin already had Octopus/Cassell in mind as an imprint that would be interested in the proposal.

These are my take-homes after having my first book published:-

1. Only approach agents that list your type of book as those they might be interested in. Time is at a premium in the literary world and you’ll only be wasting yours, and the agent’s, by submitting material of a genre they don’t represent.

2. The ‘Writers’ And Artists’ Yearbook’ is not infallible. I started my search for an agent by contacting agents listed in the WAAY as specialising in music or popular culture but, I quickly discovered, some of these were categorised incorrectly.

3. When you’ve found an agent in the WAAY, double-check the agency’s website for their particular areas of interest. You may need to select a particular agent. Be sure to submit whatever they stipulate by way of a proposal, in whatever format they specify. This might be the first three chapters but it can vary widely between agents – and it’ll also differ depending on whether your book is fiction or non-fiction.

4. Deliver on, or before, the deadlines. This might sound like common sense but my agent and publisher seemed so delighted by my ability to meet deadlines that maybe it’s something they’re not used to! In my case, delivering promptly meant that my book could be published in the summer and not in the autumn, when it would be in competition with the Christmas market.

Being a member of LWC has helped me to be confident when approaching agents but also helped me to deal realistically with rejection. When agents say your work is ‘not what they’re looking for’, frequently, I’ve learned, that’s just the truth!