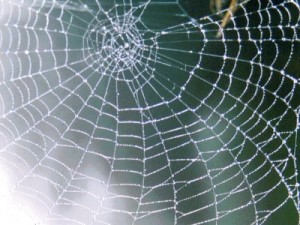 I became aware that I might have a kind of writerly synaesthesia the other day, when I was trying to think of titles for my second novel, and realised that I thought of the book as a cobwebby, sort of a shape, with the main character, who is something of a matriarch, at its centre.

And then I started thinking about it, and the other ideas that I am currently mulling over have the same kind of ghostly structure in my mind.  One novel that I plan to write has always been, very clearly, the shape of one of those circles of plastic divided into wedges that you use to play Trivial Pursuit.  Five rounded triangles with a little core of something different at their centre, joining them all together.  My first novel, Luxury, was more of a series of islands, interconnected, yet warring.

Sometimes, when I am writing, and trying to get the sense of something that I am struggling to pin down, I find myself with my hands in the air above the keyboard of my computer, forming a shape or a sense of a shape with them, without quite knowing I am doing so.

Sounds mad, doesn’t it?  Maybe it is.  But I know I’m not the only person who sees the week as having a shape, for instance; and I know some see letters as having colours, or numbers as having smells.  So, I prefer to think of my book shapes not as a sign that I’ve spent too much time by myself, going a bit bonkers, but as a particular kind of synaesthesia.  And, if it works, it works.  Right?